Welcome to my About Page!

Hi! My name is Rosalina Sophia Johanna van Gelder and this is my About Page! I'm a 16 year old girl from Guelders and i'm the creator of this website!

So yeah i'm a girl like i said, and im also trans, that means when i was born the doctor said i was a boy, but i ended up much rather being a girl. my pronouns are She/Her and They/Them, and yeah that's about it.

My name is Rosalina Sophia Johanna van Gelder-o'Cobhthaigh, or for short Rose Sophie Joanna, and for short in dutch Roos Sophie Johanna, or just Sophie.
Okay so when i realised i was trans i decided i needed to make a new name, so first i came up with Rose, simply because it has the same initial as my deadname but because of that i ended up not really being attatched to that name a lot so then i chose a different name, Sophie, which i really like. My eadname comes with a middle name too, its my grandfathers name, so i changed that for my grandmothers name, Johanna.
Van Guelder is just a pseudonym and like, not one i really associate with, i just use it here cause i dont wanna doxx myself.

I designed myself a coat of arms! there have been many previous versions and iterations which i will not show you, but i will show you the final piece. 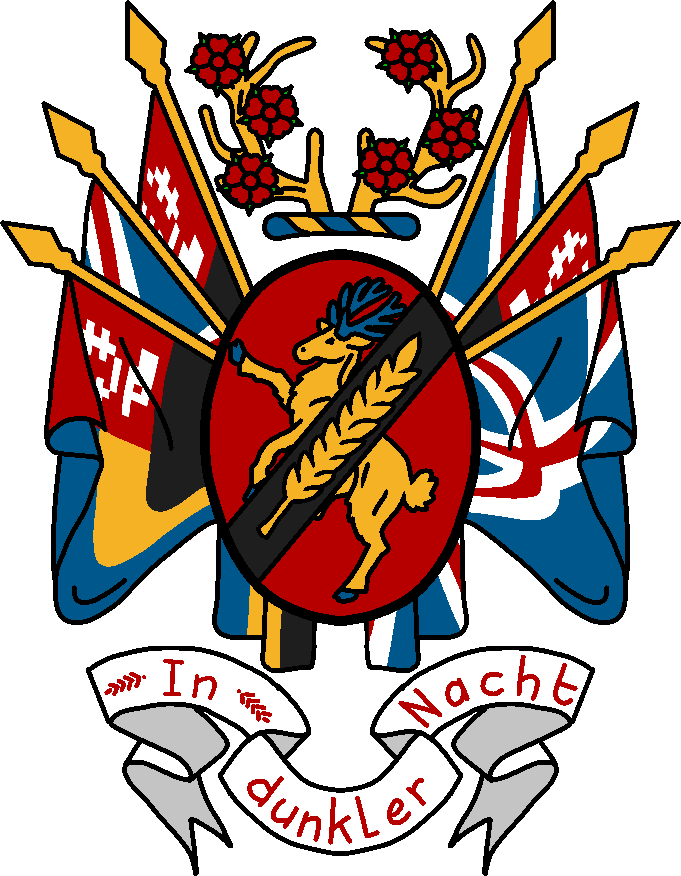 The blazon is as follows:
for the crest: "a pair of antlers or, both adorned of roses gules"
for the escutcheon: "Gules, a stag rampant erivé or, unguled and attired azure. On a bend sinister sable, an ear of wheat of the second."
for the motto: "In dunkler Nacht"

first off, the deer. The deer is like, the most prised animal in Gelderland. it's so gracious and majestic. The red deer is called "Edelhert" in Dutch, which translates to Royal deer. so the deer represents Gelderland. The field with the deer parrots the coat of arms of the Dutch Republic. thats why the field is red with the gold and blue deer. it represents my republicanism. the black band with the ear of wheat and the red background represent my politics more generally. red and gold are colours associated with communism and black with anarchism, i chose them because i am a hard leftist.

My fursona is a Domesticated Fox, which basically just means that i can give her fur patterns that real wild foxes dont have. I used to have a deer as my fursona but i grew out of that, now i have this and im very happy with it. To me my fersona is like, me but better, so my fursona is just way cooler than i am, she does a sassy pose sometimes (i never do sassy poses), she wears short shorts, she's a longboarder, and she probably listens to punk more than i do. also shes wearing her explorer uniform because I'm an explorer and i love my uniform!